A minimalist summer vacation home that blends in with the natural environment. As the entire space housed the needs of three clients, a home with an appetite for co-living was called for, without taking away the need for privacy. The result was a synergy of spaces that evokes a sense of warmth and calm.
A2120 - EMPORDÀ, CATALUNYA 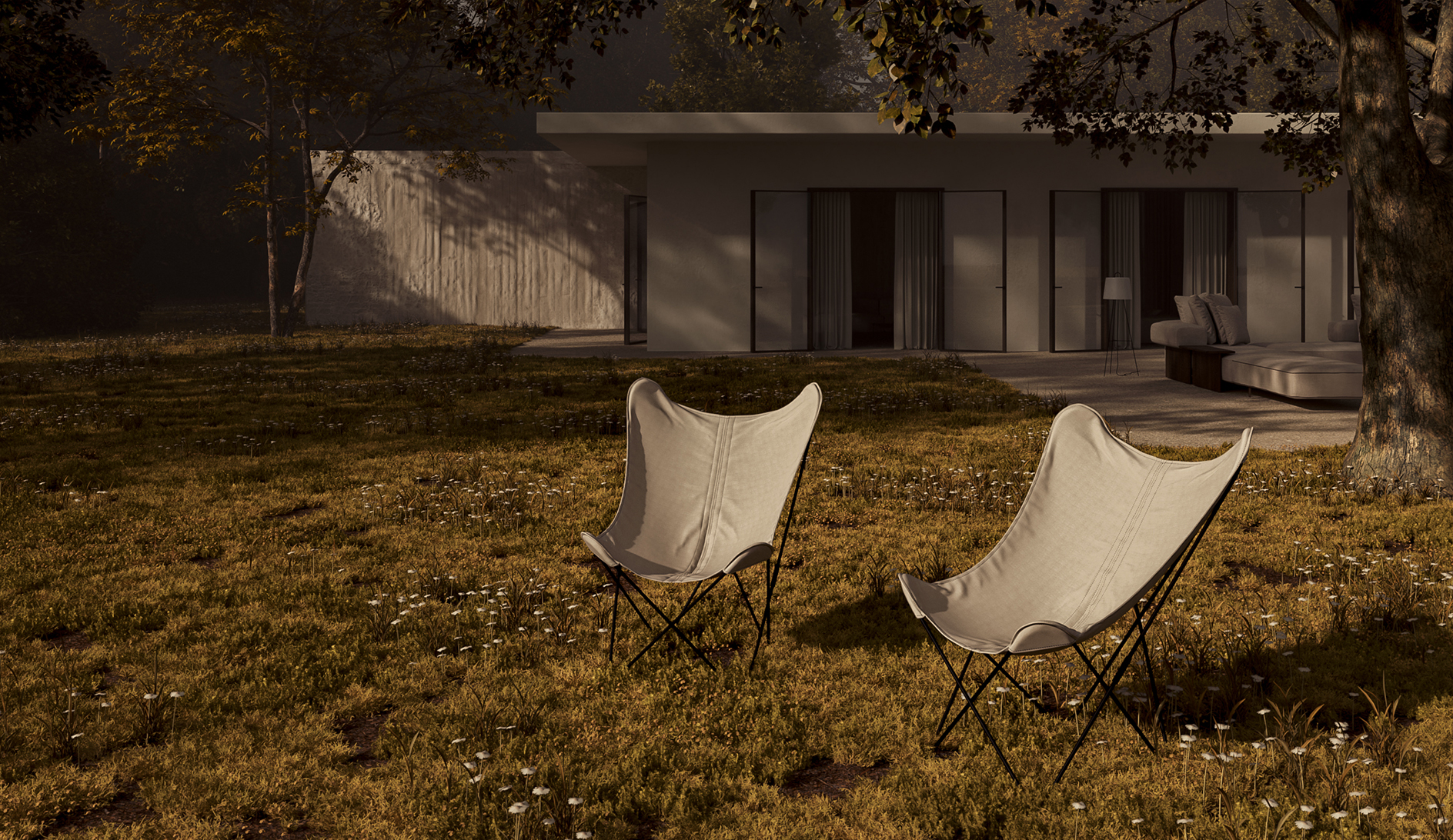 An open-plan living space that creates continuity throughout; serving as an invitation to keep the home inviting and simultaneously appreciative of the external environment. 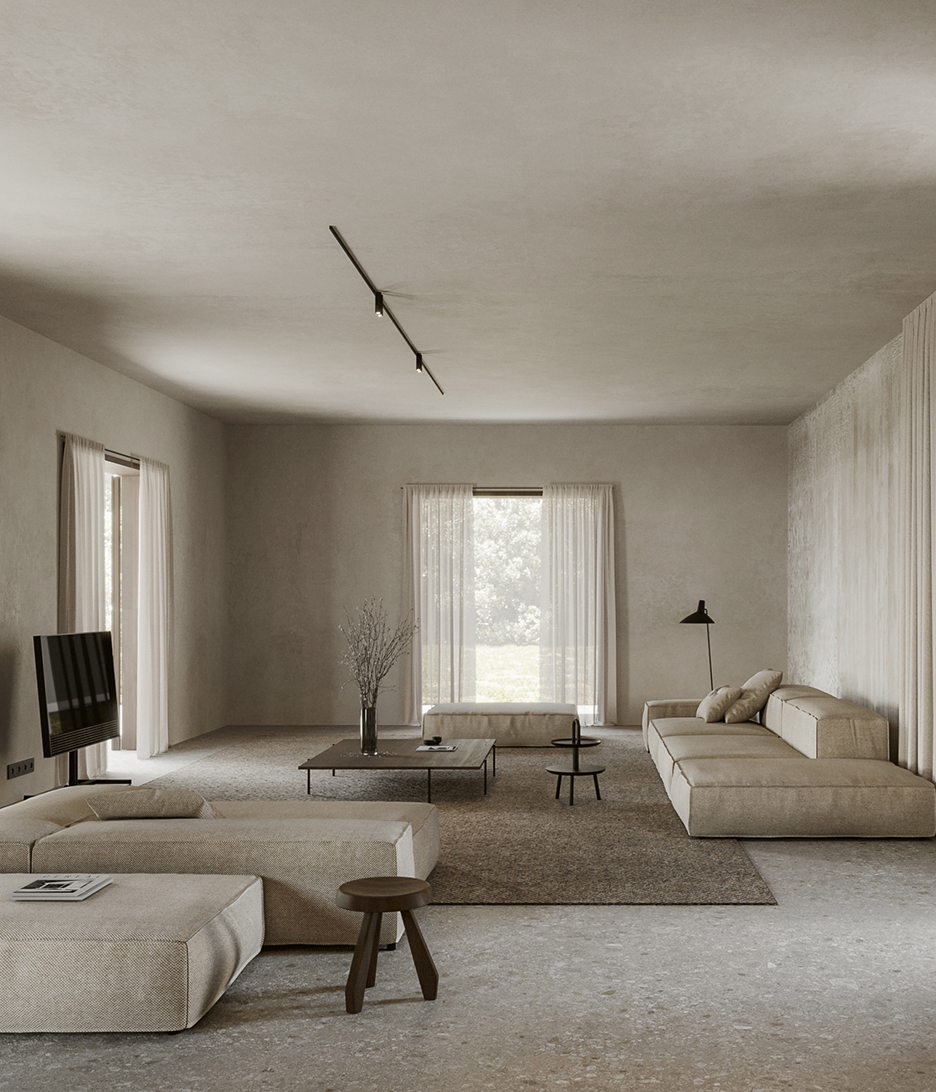 Attracted by the conceptualization and approach to our projects, three clients showed up at our studio to share a residential project they had in mind.

The project consisted of the conceptualization of a residential holiday home environment. Initially, the clients wanted to study other options that were not reflective of the current proposal, which is the culmination of three single-family spaces that could function independently of each other.

Another requirement of the project was that the clients thought of housing tenants during different times of the year. We understood that the space had to offer versatility and that needed to have the ability to function together or independently through the segregation of the areas. Through this viewpoint, the space had to meet additional requirements of functionality and privacy.

Another factor in our assessment phase was that the three clients shared similar requirements and housing needs, which allowed us to approach via a common objective - a synergized home environment. It also helped to understand and treat these three parties as a single client to create a unified proposal.

What resulted was an exercise in synthesis and avoiding the repetition of spaces for the benefit of a more optimized and sustainable purpose.

A natural environment encloses the interior design project with the location near the Catalan coast. It is a place surrounded by fields and historic villages. Thanks to the project being located next to the coastal and Mediterranean towns, an outdoor and open-air lifestyle was sought.

From our point of view, part of comprehending this lifestyle is that there is socialization involved and a need for large outdoor spaces to share. The location allowed us to choose orientation and flexibility when considering the functionality and layout of the space. No other element appeared that justified a particular action or a design deliberation.

Before entering the conceptual design process and evaluating the factors described, we understood that the solution could lie in the approach of a shared project, through aligning the spaces, routines, synergies, and the concept of a collaborative economy. 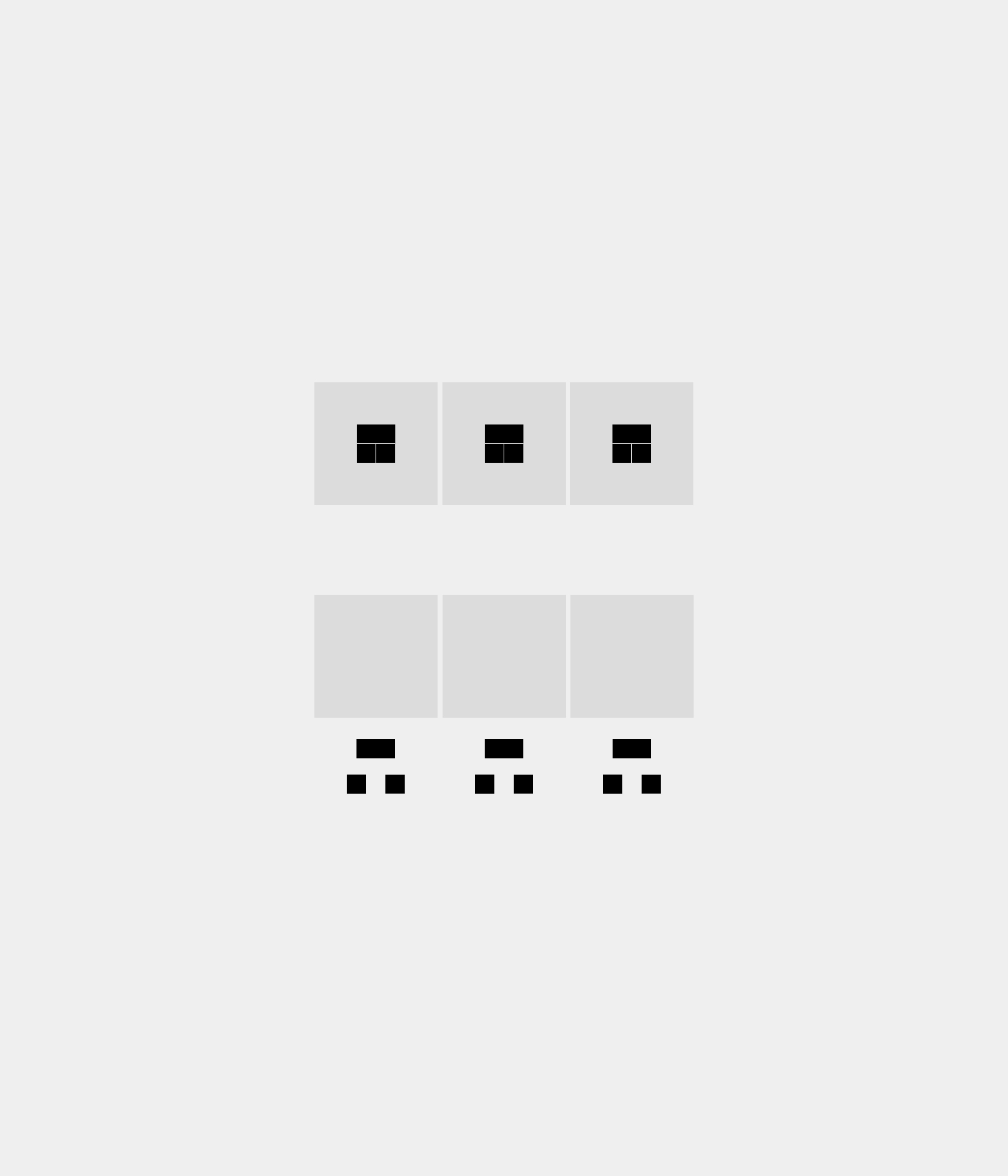 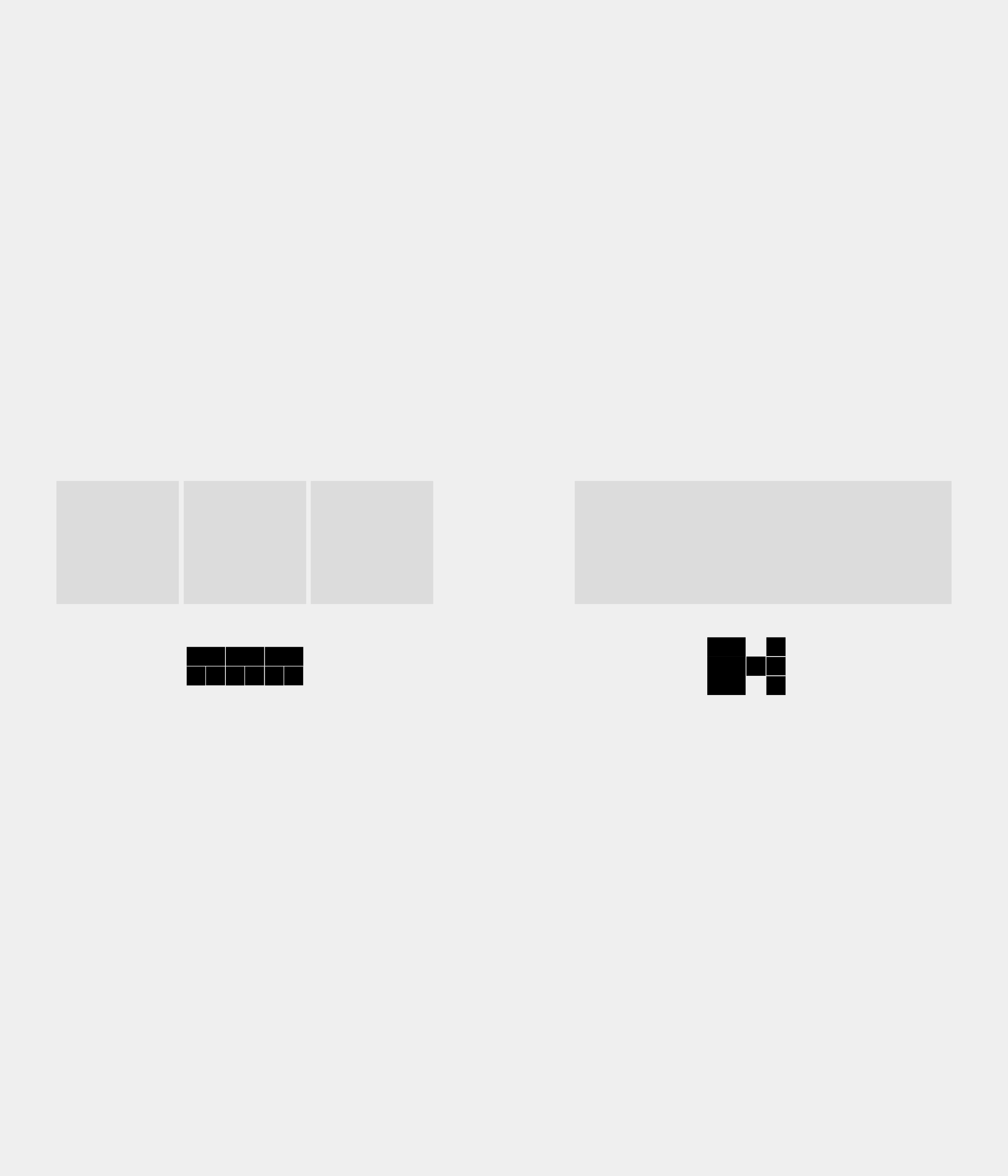 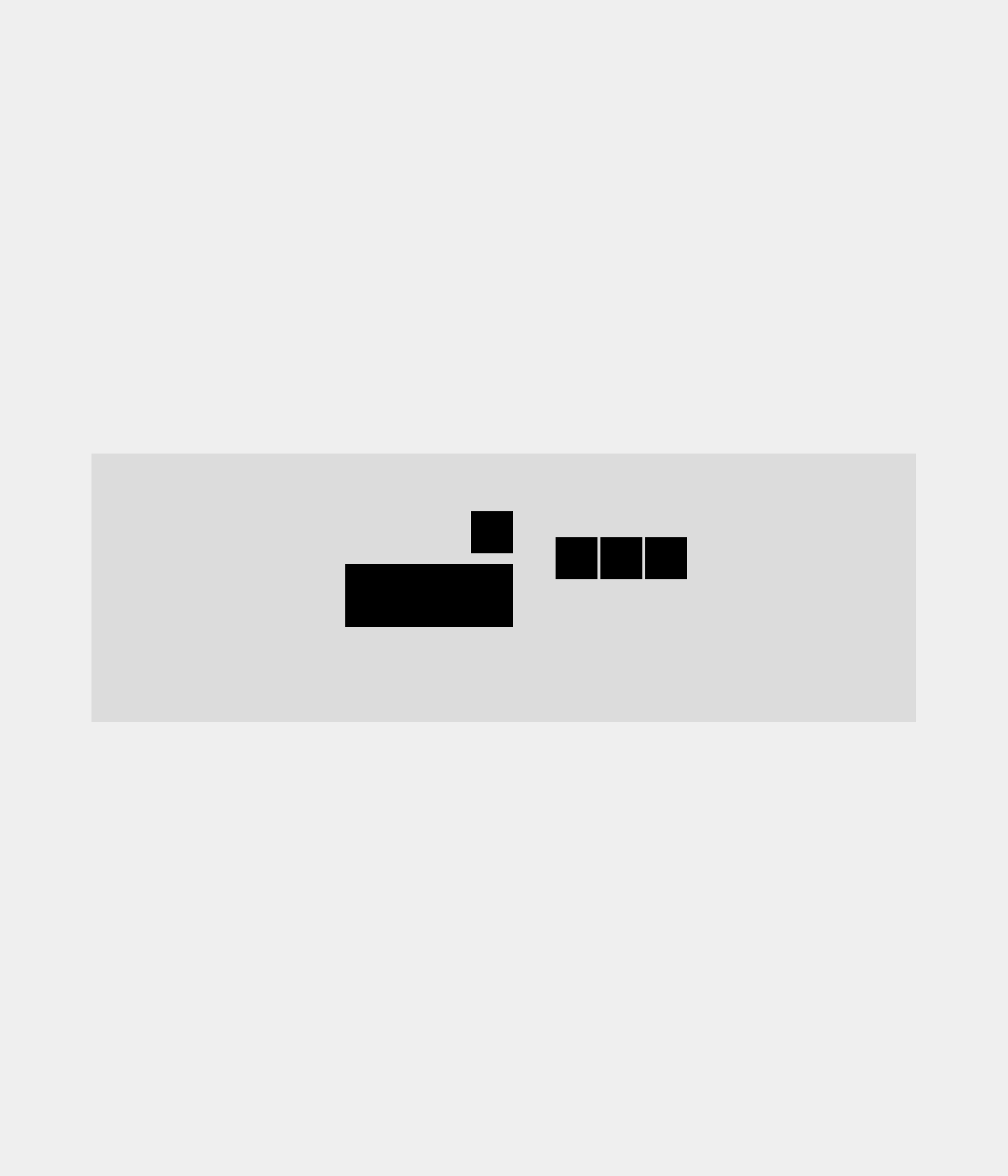 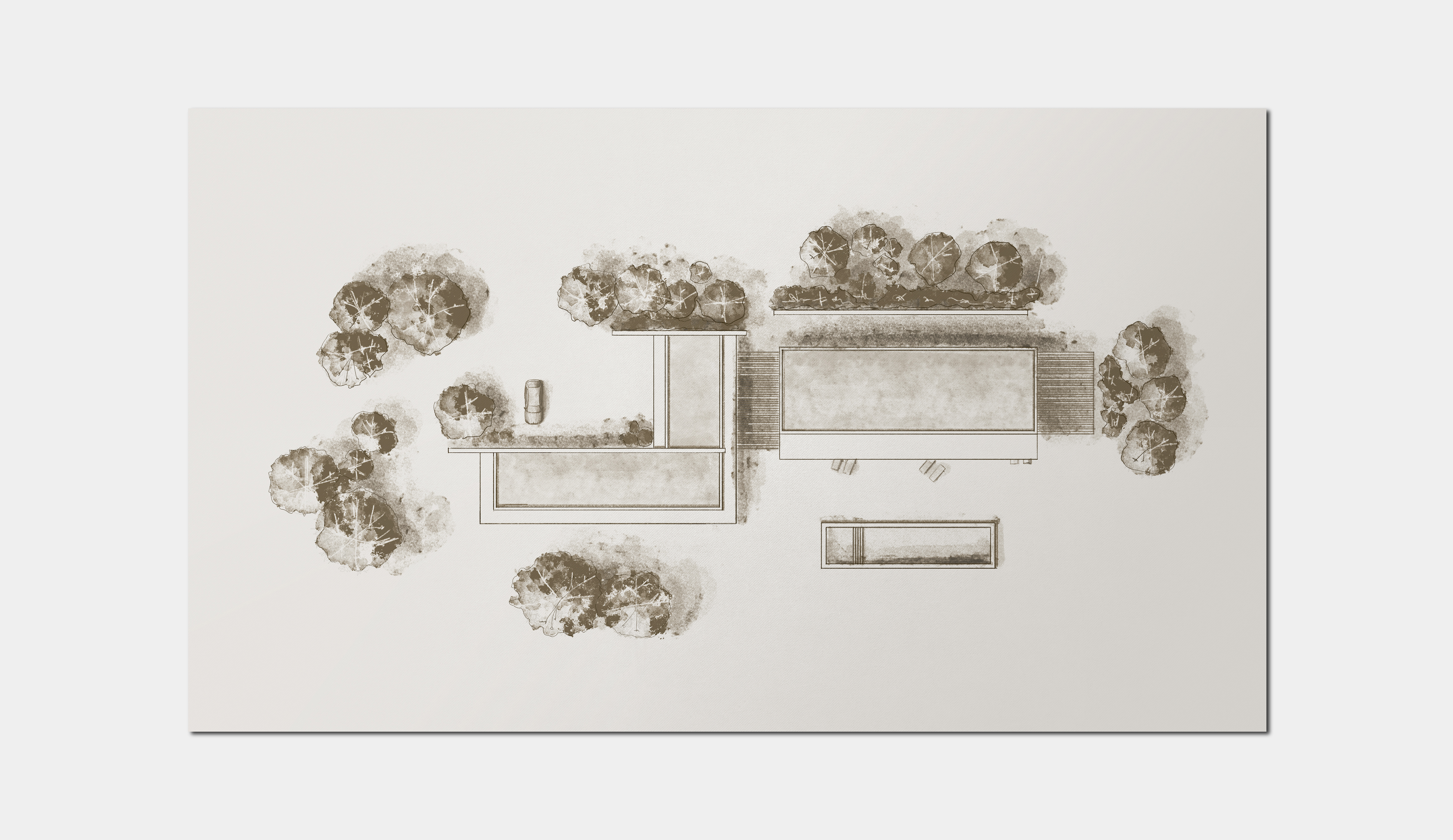 Our goals included optimizing the corridors or transit areas, increasing the space for the indoor and outdoor common areas, and focusing on the house’s functionality. 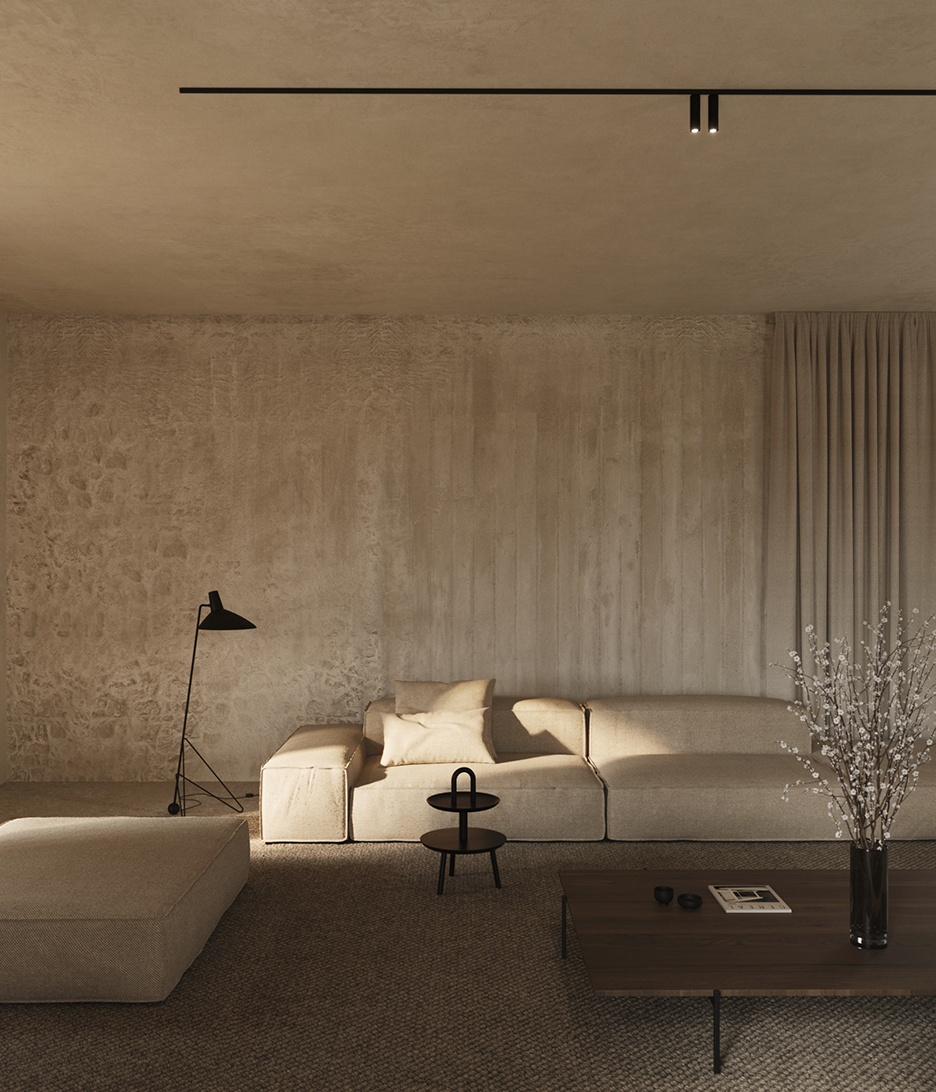 From the first instance, we commenced to carry out an exercise of isolating and synthesizing the functionalities of the space. Under our vision, we wanted to take the project to almost a routine of saving the designated common areas and doing justice to all three spaces. We also wanted to give more presence and dimension to socialization spaces. If a shared solution was reached, we could make the outdoor areas grow. Each user could benefit from the larger common areas to allow sharing of the space. The only disadvantage of this approach was that a degree of privacy is lost, however, when discussed with the clients, they agreed that it was a good compromise.

Another benefit of sharing spaces and reducing the size of the home was that we could propose higher land occupation, which could allow us to build on one floor that would benefit the overall functionality of the house.

If needed, the home while occupied out of season could remain partially closed, but still persist in covering all the housing needs required, making it inhabitable throughout the year regardless of the number of inhabitants.

The ultimate challenge for us was considering that the clients used the home seasonally, with the option of having guests over. Due to this, the approach used was to design a multipurpose space conceived to function as a whole or by separate spaces that would allow any inhabitants or guests to be able to rent it in its entirety or by rooms. These factors helped us to design the house. We understood the space from an occupational point of view; where the home offers the possibility of covering all the needs necessary during a stay. Besides this, depending on the guests, time of occupation, or season of the year, the ability to close off part of the home would contribute to notable energy savings, thereby creating a sustainable and eco-friendly element to this project.

This exercise forced clients to understand that the focus on the property and its usage would be more modular in its approach; they could then adjust how they use the house in favor of energy savings and cost-effectiveness. 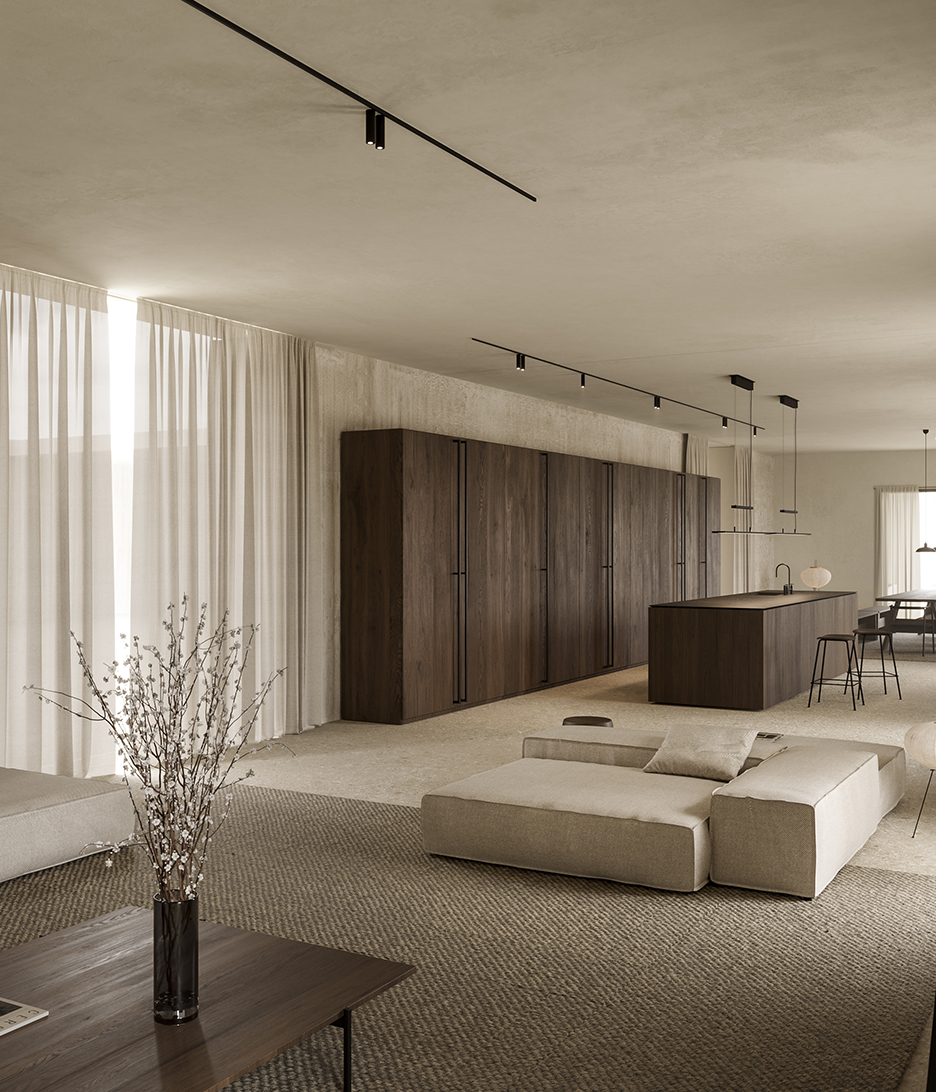 The surroundings act as a design element for the home, whereas permanent contact with the outdoor space is the primary purpose. The transition from the day to the night area emphasizes this experience. 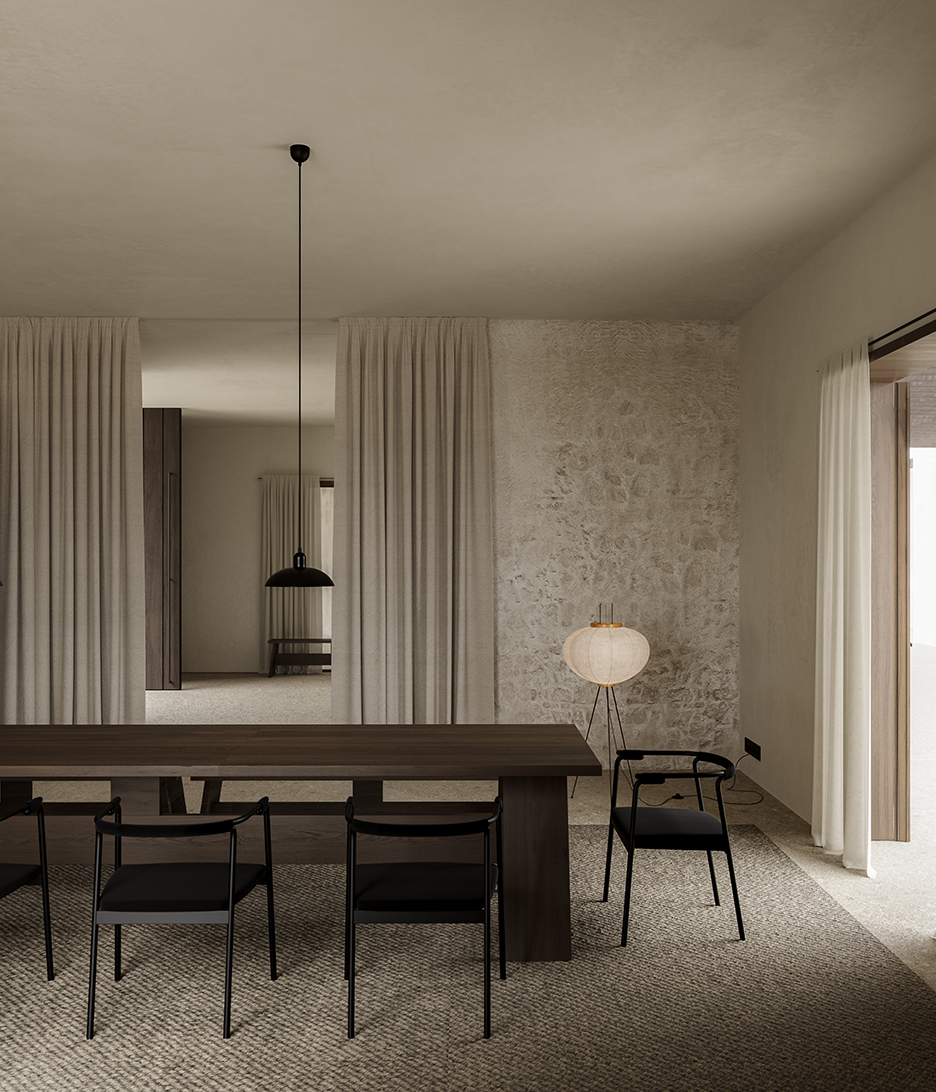 The occupation of the plot allows us to have a single-story home. It was proposed to separate the house into two large groups - a day area where we find a more open, shared, and socializable space, and the night area; which is a more private area, where the rooms are located.

The entire house is preserved with two-sided communication and synthesis. The house was oriented so that all the spaces received the direct incidence of the sun. Keeping the north face of the home as protected and closed as possible would protect the inhabitants from the strong wind common to this region, and also helps us force cross ventilation that allows us to keep the rooms open and fresh in summer.

The more closed-off space houses the access, circulation, and service areas. The house’s layout is on one floor, and the entire interior distribution has direct and walkable contact with the outside, thus enabling a Mediterranean lifestyle. The day area is formed by a distributed entrance, leading us to the house’s different areas. There is ample open space marrying the living, kitchen, and dining areas. The kitchen is the nerve center of this area, standing right in the middle - enhancing sociability.

A minimalist and functional architecture that blends in with the environment helps to enrich small construction details and natural materials.

The entire transition from the day to the night area is through uncovered areas, which substantially freed up any further construction since we understand that being a seasonal summer space does not mean inconvenience.

The area designated for the rooms is made up of three apartments that can each function independently. Each of them is designed for two people and, occasionally, up to four. A small kitchen and dining room allow us total independence without needing the rest of the house, increasing the users’ privacy.

The three rooms or apartments are internally connected, giving more versatility while renting these spaces. The functionality of these apartments was designed keeping in mind off-season housing and shorter stays. These apartments can independently cover all the needs necessary, with the ability to keep the rest of the house closed.

The pool is located in front of the rooms. It was sought to create an environment of rest and contemplation, and contact with water helps achieve this feeling.

In this project, we understand the pool and its surroundings not as a playful, active, and noisy space but as a soothing space promoting calmness and peace.

As in all of our projects, greenery is an essential aspect of the conceptualization process, not only for its aesthetics but also for its functionality. In the outdoor area, the surroundings are full of landscaped areas and trees. In this way, the incidence of the sun can be controlled naturally and allows us to integrate and blend the architecture with the environment. The entire garden area is planted with plants and elements from the region, seeking both integration and sustainability.

The same strategy was applied to the materials used - they were selected for their easy application and proximity, thereby establishing control over energy, production, and transport costs.

The interior design is comprised of a contemporary and functional proposal. All the elements of the home allow us the flexibility to change the spaces depending on the activity or users. Unique pieces with a lot of character provide uniqueness and harmony. Highlights include the Living Divani sofa, which offers a modular option that enables the inhabitants to create different space configurations. A lower positioning of the sofa creates continuity and communication in the entire space.

Also noteworthy are the Akari lamps by Vitra and handmade wallpaper that give a relaxed light to the space, thanks to their traditional washi paper finish that harmonizes and softens the environment. 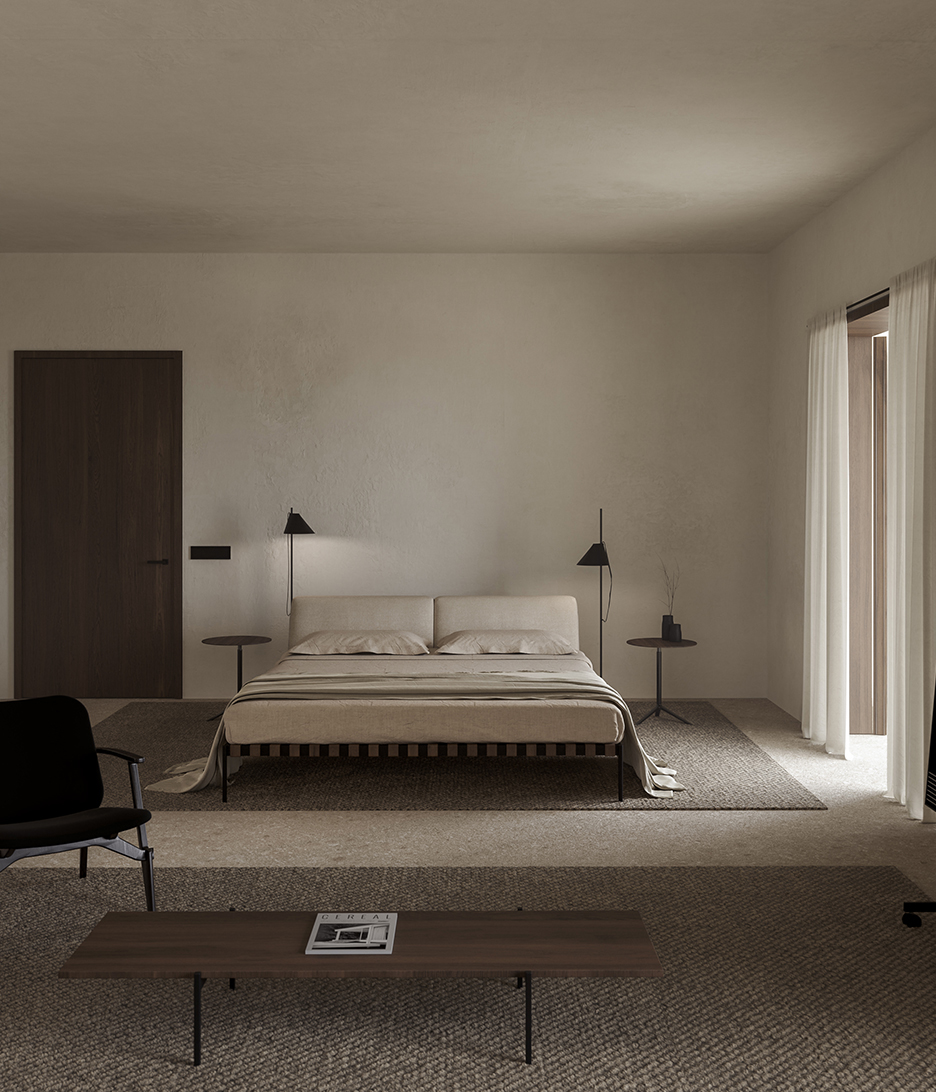 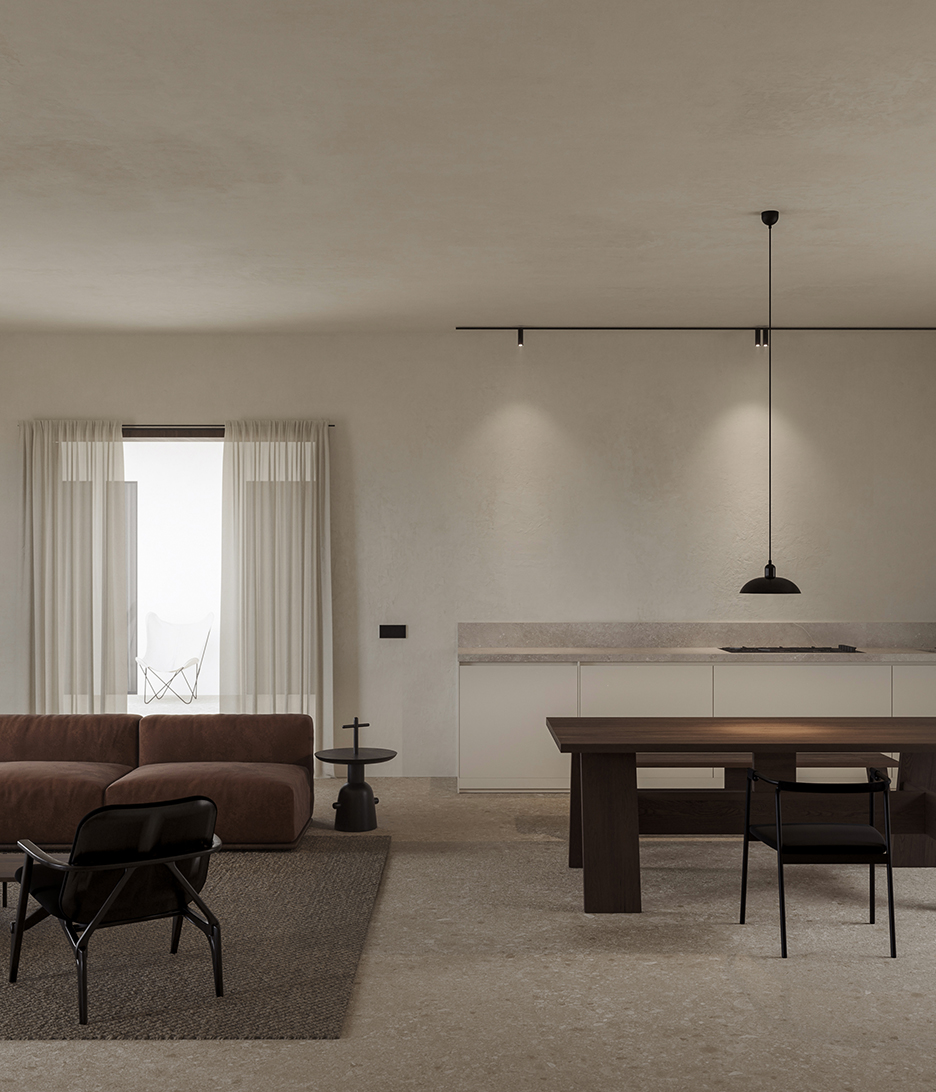 A warm & minimal interior design was achieved to ensure that the elements take the center of attention and create a comforting experience, given the versatility of the space.

The Fayland table by E15 reflects the project concept; it carries a purist use of material and a clear design language, thereby enhancing the construction details which are the heart of the design.

Using raw natural materials such as European oak, linen, wool, and cotton provides us with a degree of comfort and delights the senses of sight and touch, and provides warmth simultaneously.

All these materials carry with them a natural beauty, which stands out and takes center stage, thanks to the minimalism highlighted by the pale cement and clay box style of architecture.

Materials blend in with the environment and natural light, creating a perfect composition and providing a space for immersion and relaxation.

The delicacy of the materials is reminiscent of a warm and peaceful summer afternoon.

Do you have any project in mind? Learn more about our work PROCESS